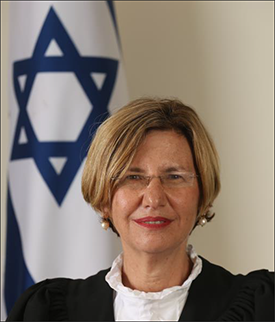 Judge Daphna Blatman-Kedrai has held the position of Director of the Center for Judicial Education and Training in Israel since 2018. Judge Blatman-Kedrai has led significant reforms in the training of judges in Israel, including the transition to hybrid learning, training in preparation for significant reforms in the civil and criminal matters, specific training in the issue of insolvency and was very active in the field of training leaders and managers of the judiciary.

Judge Blatman-Kedrai has led the design and implementation of the Peer group Consultation as a Judicial Training Model project, which she presented in the IOJT conference in Manila, Philippines. At the IOJT conference in South Africa Judge Blatman-Kedrai presented a presentation about the preparation of the Israeli Judiciary for the Reform in the Law of Civil Procedure that took place in Israel.

Judge Daphna Blatman-Kedrai is a graduate on the Law Faculty at the Hebrew University, Jerusalem.